Monica Hamburg is a performer who’s done it all, from video game voiceovers to film to hosting the dark and deeply funny Dazed and Convicted: Craigslost podcast. There were too many fascinating stories to fit in just one post, so please enjoy the first half until we publish the second later this week! 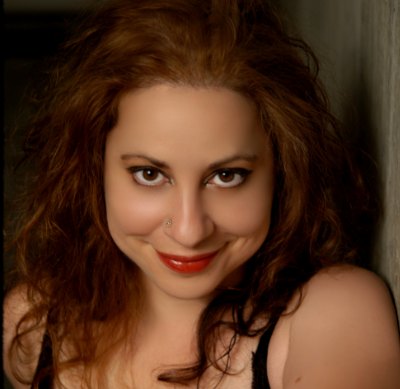 How long have you been doing voice acting for?

I’ve been acting for many years, and I’ve been doing voice-overs for 10, on and off. I got out of it for a while, then a few years ago I was doing my podcast, Dazed and Convicted: Craigslost. In its first incarnation, my co-host was editing, but eventually he taught me and I took it from there. Around then, I began to think about skills I had that would pay—and that I wouldn’t hate—and there were few and far between. Everything I’m good at doesn’t pay. If there’s a talent that doesn’t make money, I’m on it.

However, I really did enjoy voice acting, and gaining the ability to edit was super helpful. My podcast had sketches, so I did a lot of different characters, which got me way more comfortable with my own voice. Sometimes people don’t understand that you’re not just talking—you’re really trying to paint a picture in their minds. Since it’s through audio, you have to be a little bit bigger. You have to convey so much. I’ve also done some video games.

What types of parts have you played?

I’m trying to think if I’ve always played the bar sluts, but a lot of parts are like that. There was one where I was a disenfranchised bartender type, and in another I was an injured Russian ballerina that was exacting revenge on everyone. I think “disenfranchised” is the theme of a lot of characters I’ve played. Mostly people life has not been good to in some way. Three-dimensional characters.

I’ve worked with A Thinking Ape in Vancouver, which is a really cool mobile game company. I did the voice for an Alice In Wonderland game they have. I was Alice and the Queen of Hearts. I’ve done two or three others for them. I was this Polish barkeep or storeowner. It’s really fun to be able to do different characters.

Do your clients give you much direction?

With a lot of stuff I do, I have to direct myself. They’ll send me the copy, and then I’ll try to get as much input as possible from them before recording. If I’m working for someone and I’m not in the studio where they can direct me or they don’t want to actually pipe in, which happens a lot, I’ll ask them what they’re looking for. Sometimes they’ll give me really good direction, like “This is for elderly people who you want to explain the concept to without being condescending.” Other times, they might use conflicting language, like “You have to be hopeful and then kind, and then convey a sense of malaise at the same time.” No one can do all that.

Usually, I’ll say, “Okay. Why don’t I record two paragraphs, send that to you, and see how it sounds?” Then they can make alterations like, “We like that, but can you slow down?” or “That’s good, but can you be a little bit more perky?”

That’s the process. It’s about getting their input and making sure it’s what they want because ultimately they’re the client.

Do you have a dream voice-over gig?

Still video games because they have so much leeway in terms of their range of characters. They develop interesting ones. It’s like the movies, except they have better budgets, oddly enough, and they’re able to be more creative sometimes. They also get some big actors. The characters are more complex than a lot of characters in movies in some ways. Have you ever played L.A. Noire?

I don’t play many video games, but I went over to a friend’s place, and she had this game L.A. Noire, which is modeled after what Los Angeles looked like in the forties. It’s so gorgeous and detailed. You’re solving this mystery and driving through L.A. in the forties. The sets are so well designed and the storyline is really interesting. We got nothing accomplished, either socially or within the game, but we were there forever.

I find that with video games, you’re able to really stretch. To some extent they’re realistic, but there’s so many otherworldly things, so it’s also really fun to do exaggerated characters a bit. I love being evil. That’s super fun. I like that kind of stuff.

What other types of acting do you do?

Movies are still a great love of mine, but there’s something to be said for the fact that video games are interactive. I’ve never been very into theater, which says a lot when you’re an actor, but stand-up comedy has an element that feels much more interactive. I’m just starting stand-up, about four months in, and I enjoy it. I also really love watching and observing great comedians. As an audience member, you may not want to be a part of the person’s act, but there are two sides. You’re the listener and they’re the talker, but you affect each other. I find that’s what makes video games so engaging—it’s interactive and immersive.

I’m also trying to put together a one-person show, so I’m doing open mic shows now. Then I do corporate voice-overs as well.

What’s the most interesting or bizarre gig you’ve had?

It was a video sales letter.

It’s one of those things where you’ll click on a site and it starts automatically playing what’s basically a three- or five-minute pitch. It’ll be something like, “I started my own business when I was 14 years-old, and after a lot of setbacks, I’ve learned these techniques, which I can teach you about at the end of this video.” It’ll take you through the whole trajectory of this person’s life. Unless that person is the owner of the company, they’re generally an actor, but you have to believe that whatever they’re describing actually happened to them.

What was this particular one about?

I won’t be too specific, but it was about how to win your ex-boyfriend back. It basically said, “This technique will help you win your boyfriend back. It doesn’t matter if he left you because you tried to murder him or because…” I mean, not that extreme, but pretty out there.

When I was recording that, I thought, “I haven’t had a chance to do longform acting like that in a while.” I went through all these emotions, all these phases of expressing sadness and then hope. It involved so much acting—not in an overboard way, but in a very natural way. You have to sound like a person who actually went through these things. It was very cool.

At what point did you decide you needed a website for your voice acting?

I had a somewhat unique situation. While I’m very public about who I am, and I have this edgy podcast and that’s my sense of humor, one of the things that a few people I respected kept coming back to was, “What if you created a site that isn’t linked to anything else of yours?” If I had a site that linked all my materials together, then my other presences would be automatically tied to my voice-over work. While some potential clients would be able to separate that and say, “Okay. We’re not going to hire her for the edgy stuff. We can hire her for straight corporate,” some people would be unable to compartmentalize that.

What led you to Onepager?

When I was doing research, I read a lot of top five lists about standalone sites, but still, a lot of them had too much. I knew I didn’t need 50 million components, and the idea of having just one page was really appealing because it was so simple. Just very clean and you saw what you got right away.

I don’t find WordPress easy to work with, especially if you’re not tech-headed. I’m very functional with computers, and I’m really good at figuring things out, but sometimes figuring something out on WordPress will take two days of your life. I was like, “If I’m going to have a site, I need to have something that I can build fairly easily that will be very easy to use and alter. It’s just going to be mine.”

I looked at a couple examples of Onepagers, a jazz musician’s and Prosperity Dumplings. I also saw that you guys had the audio component, which is what I needed. I thought, “It’s so clean. It’s so simple. I can design it myself. This is perfect. Now I can have a site that’s separate.” I was so excited when I found it. It made everything so easy.

Is there a feature you find especially useful?

A lot of website builders make it really hard to embed audio, strangely enough. You could have an MP3, but it wouldn’t be super functional. I already had SoundCloud, and I could just put that on Onepager. I’m really enjoying it. I’m so glad.

If you were given a thousand dollars to invest in your acting work, what would be the first thing you would put it towards?

What I need right now is to become a better comedian. I know there are classes and I’m only so sold on that. I would need a venue eventually to put things on. I record a lot in my friend’s studio because my apartment building is super noisy, obviously—hey, that’s what I’d use money for!

Now for voice-overs, I use a studio that’s actually in the same neighborhood as me. The engineer guy is super nice and really competent, and I don’t have to edit when it’s larger projects. This is a really cool arrangement—it’s just that I have to factor in cost. With my own studio, I could just be like, “Okay, I can do a voice-over for this much and I won’t factor in the cost of the studio because that’s already been taken care of by the magic 1,000 dollars that dropped down from the heavens to fund my career.”

Stay tuned for the next part of Monica’s interview, in which we discuss stand-up, morally questionable Craigslist posts, and run-ins with pet psychics.